Silom Road was packed. I don’t think anyone – not even the organizers – planned such a scene. What a turnout it was on the first Sunday in June when crowds poured into the area to join the Pride Parade. There was music and dancing. Lady Gaga’s Born This Way blasted out of the stereo. Feathers and sequins glistened in the late afternoon sun. And amidst all the fun, there were voices of people calling for marriage equality, the rights of sex workers, and the fall of patriarchy. For equal rights. For equality.

Bangkok Naruemit Pride was perhaps the biggest Pride event in Bangkok in recent memory – and what a diverse crowd it was. Foreigners and Thais, tourists, locals, politicians, activists, beauty queens and influencers were all there. Two women in wedding dresses made Silom their aisle and altar when they married among the people. There were kids clapping to the side as the drag queens walked by. Bangkok’s new governor, Chadchart Sittipunt, joined the parade and was followed by a crowd of journalists and admirers. People were walking, riding in wheelchairs and some were hitchhiking on a convertible. For a day, Silom Road belonged to everyone. 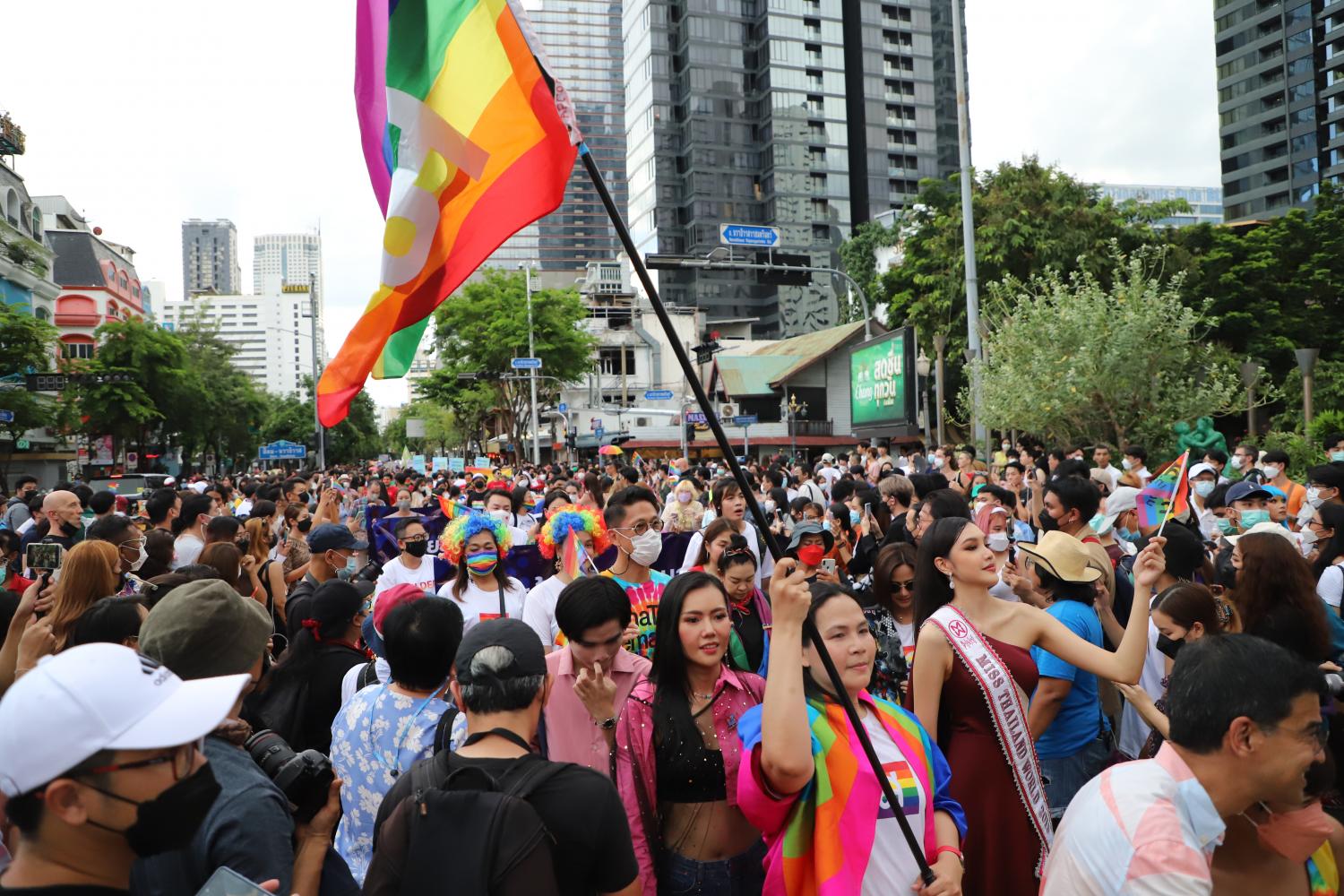 It was a glorious scene – a successful day to kick off what turned out to be a busy Pride month that also coincides with the country’s post-pandemic opening. The festive air was palpable as fashion shows, film screenings and Pride-themed parties popped up across the city. The Miss International Queen transgender beauty pageant returned with events throughout the month. There was the three-day Bangkok Pride: Rainbowtopia festival at the BACC. In several provinces, smaller-scale parades have taken place, including a larger one that was planned for Chiang Mai last weekend.

The rainbow has conquered spaces on a scale Thailand hasn’t seen, and not just at Pride events. Looking around Bangkok, it’s easy to spot malls adorned with a festive rainbow. Rainbow-themed products are there to draw baht out of people’s pockets. Some stores even have a “Pride Month Sale”. 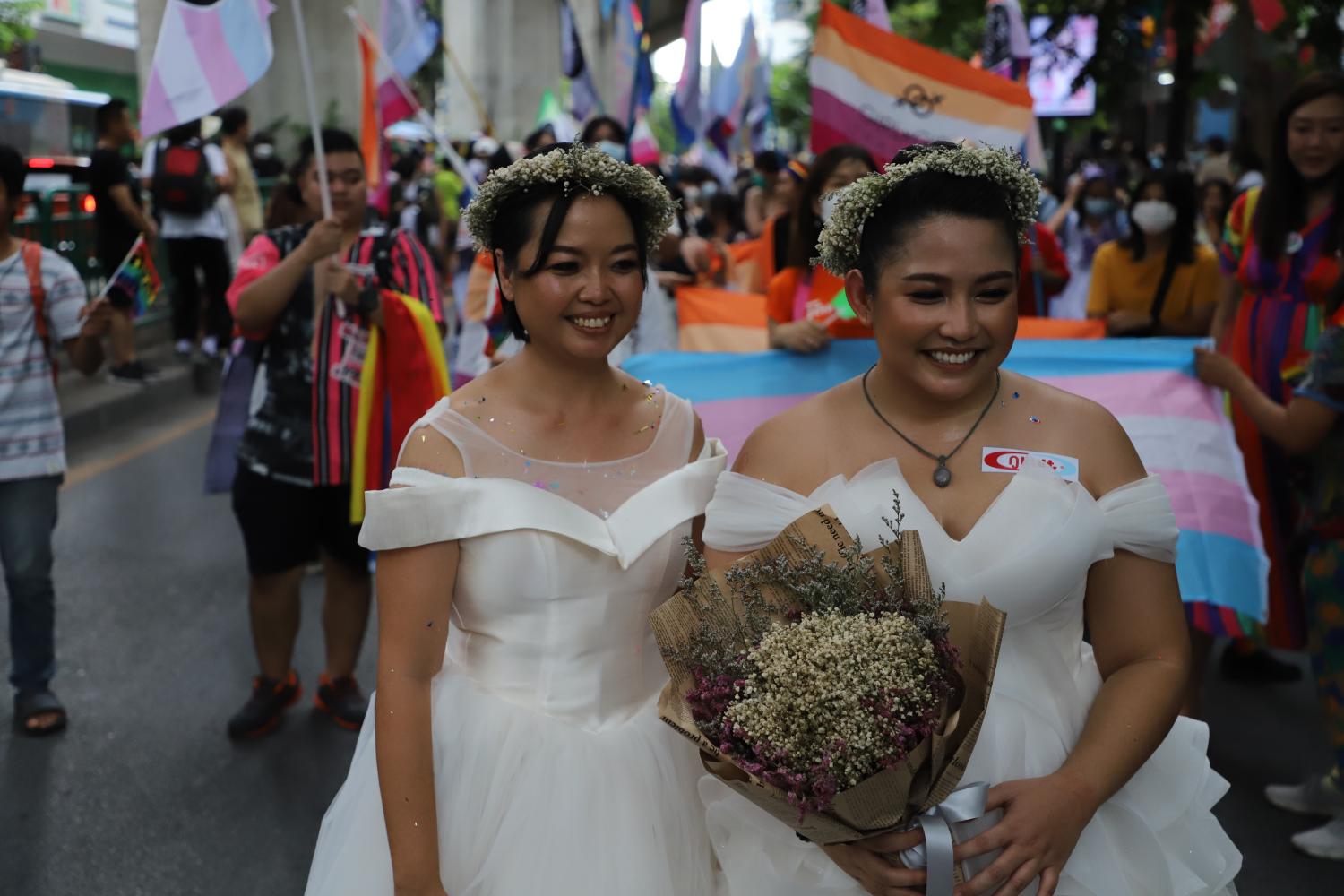 Two brides got married in the pride parade.

On social networks, many companies and political parties put the rainbow on their Facebook profiles. It was almost fascinating to see people jump on the Pride bandwagon and tout it as the coolest fashion trend. The rainbow, symbol of marginalized and discriminated populations, is now celebrated by the public.

For many, it’s a show of solidarity, especially if it’s accompanied by other actions like companies announcing their LGBTI-friendly policies. At the same time, for many others, it’s an empty, insincere gesture of rainbow washing. Companies that have no policies supporting LGBTI employees, political parties that vote against same-sex marriage, and media organizations that still portray a transgender woman as a man in a dress — even though they’ve changed their avatars from social media in the colors of Pride. The residence of the American ambassador decorated with the rainbow during an American-British Pride reception.

Rainbow washing is problematic, and this may be the first year we’ve seen it on such a large scale in Thailand. The debate over how this diminishes the message and meaning of Pride has been going on for years. Pride is not just a celebration or party to be marketed like Christmas. The spirit of Pride is an unyielding fight and a warm embrace of diverse identities. It is a demonstration for which people shed tears and blood. From Stonewall to the rest of the world, Pride is the story of those who have fought and those who are still fighting – and will continue to fight – against discrimination and inequality.

This Pride month, the biggest fight took place in parliament as, coincidentally, a bill supporting marriage equality – along with separate bills supporting civil partnership – got its first reading. This marriage equality bill, announced by MP Tunyawaj Kamolwongwat of the Move Forward party, has met with both sympathy and resistance. There were votes of approval from other MPs, even those from other parties. And there were also opposition MPs who argued that such a bill, if passed, would violate the religious beliefs and rights of heterosexual men and women. 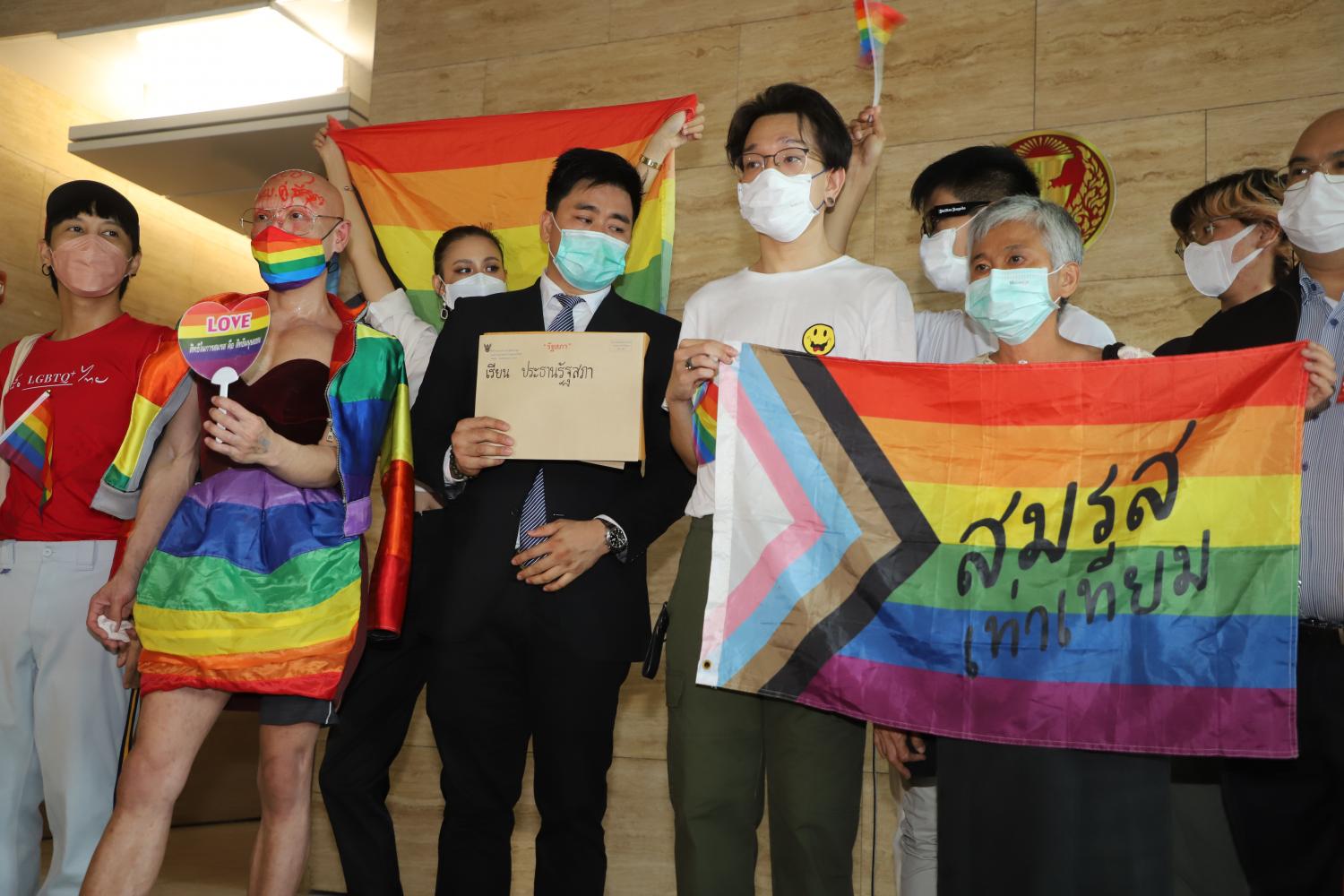 If love wins, who loses? If marriage equality does triumph, then what harm does it bring? Would an institution be destroyed or society collapse if two people of either sex could legally marry? Why is there still so much opposition and hatred towards him and what do people really gain from rejecting same-sex couples, if not just to satisfy their own decrepit belief?

From only one man and one woman can be married, the marriage equality bill would allow two adults (regardless of gender) to be legally married and therefore entitled to full spousal benefits and recognition. This is better compared to civil partnership bills which still retain certain rights granted to married couples while leaving various points to interpretation.

I remember during the pride parade, people were shouting, “Somros thao thiam! Somros thao thiamThat’s how we say marriage equality in Thai. As I watched the reading, those voices replayed in my head, along with the smiles of a lesbian couple whose happy marriage doesn’t was not recognized by law. Marriage equality is what people want and need – something that more than 355,000 people have also signed their names to on an online petition. It is a fundamental right that does not was never considered for same-sex couples. Instead, it was removed from the start. And now, after a long fight, we are one step closer. 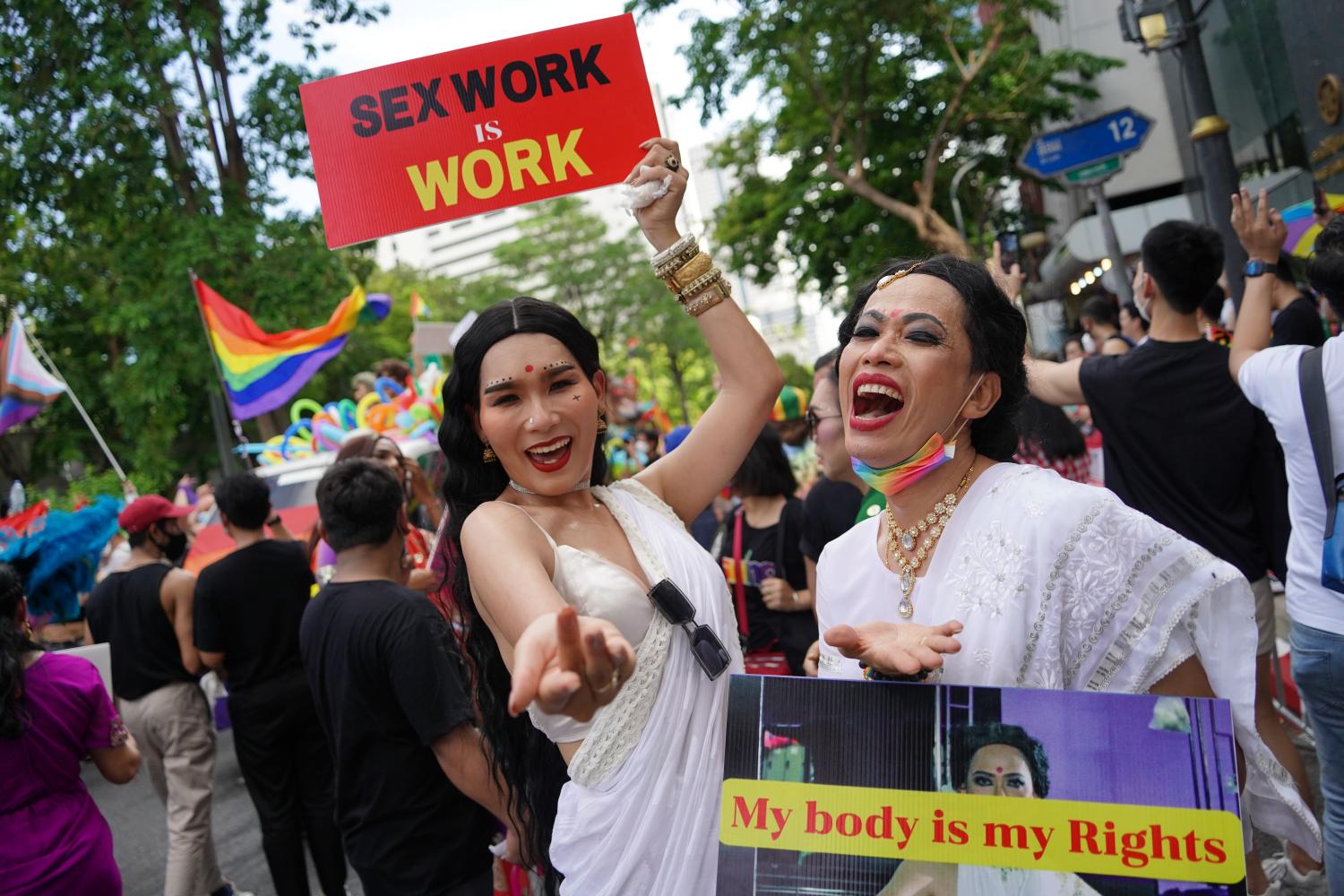 People wear white sarees like Gangubai Kathiawadi during the pride parade to defend the rights of sex workers.

As the reading progressed, LGBTI communities and their allies crossed their fingers and prayed. Then it was time to vote. People really couldn’t believe their eyes and ears when it was announced that 210 votes were in favor of the Marriage Equality Bill and 180 votes against. The first reading of the bill was a success. Activists who gathered outside parliament wept as they hugged each other on the joyful occasion. Everyone knew it was too early to celebrate. There is a long, bumpy road ahead where the bill could be dropped at various stages. Still, it was monumental – the closest Thailand has ever been to achieving same-sex marriage.

Now is the end of a month in which so much has happened. Where does this leave the future of Thai LGBTI people? The increased visibility of the rainbow seems to mean a positive shift in public opinion, but will it lead to concrete changes? Will this momentum last or fade like the colors of the rainbow on July 1? 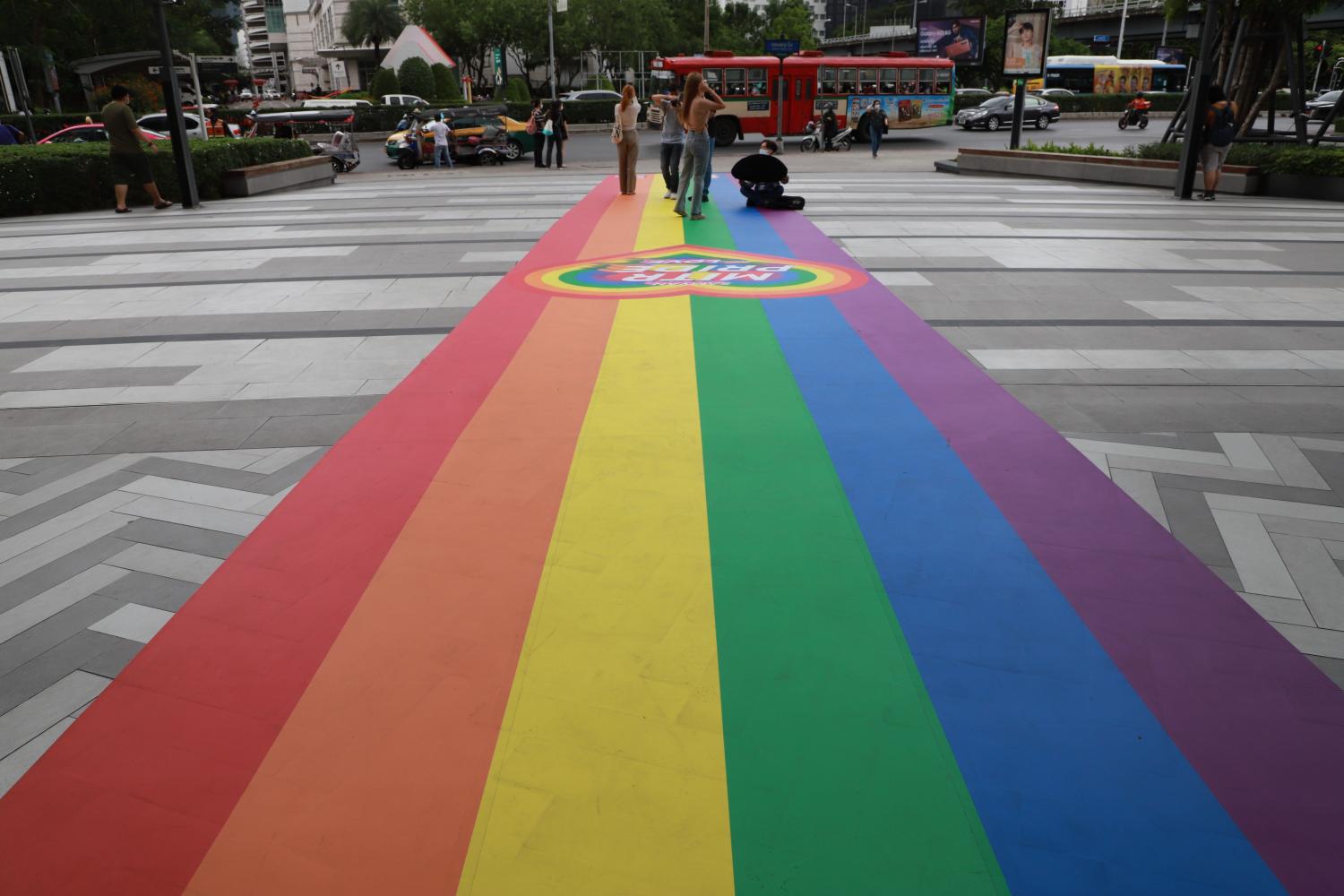 Many establishments decorate their space with rainbows during Pride month. Somchai Poomlard

Snapshots bring the checkpoint into the 21st century

[ad_1] When you have a massively distributed computing task that can take months to run on thousands to hundreds of thousands of compute elements, a hardware or software failure can mean the loss of an enormous amount of work. This is why the checkpoint – shutting down all processes on all nodes in a cluster […]

Young British filmmakers are on fire right now. Just like Charlotte Wells After Sun billed as one of the best films of the year, comes this unassuming, perfectly formed film from Georgia Oakley. Located in the north of England during Thatcher’s time, blue jean tells the story of Jean, a lesbian physical education teacher who […]

Lincolnville residents narrowly rejected a moratorium on the construction of private piers, voting 78 to 70 against the measure at a special town meeting on Wednesday night. The moratorium was put on the reunion mandate after 184 residents signed a citizens’ petition calling for a pause in development of the private pier. The petition has […]