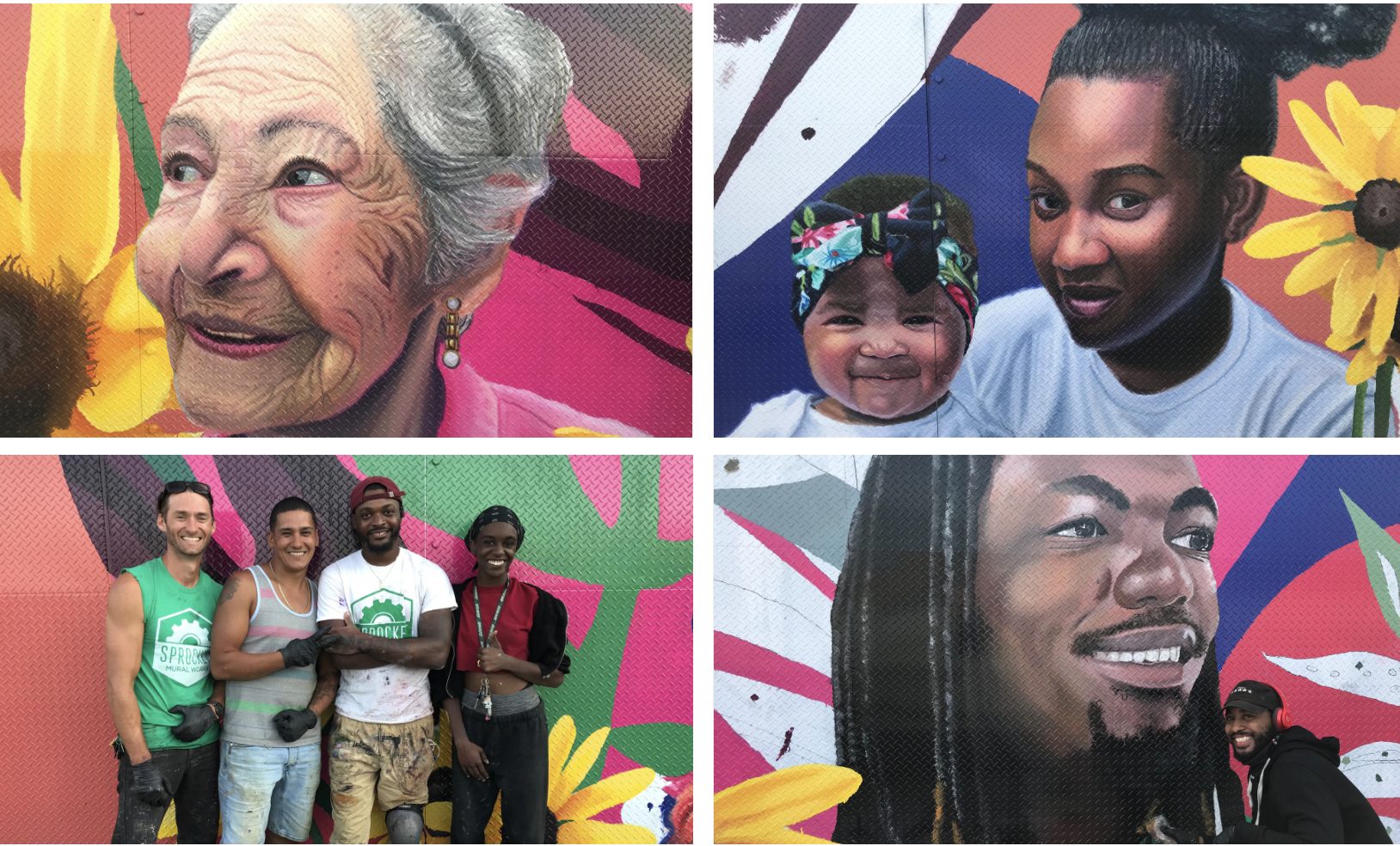 Community Portrait: Sprocket Mural Works’ largest project features the residents of Harrisburg, Behind the Brush and on the Wall.

Chances are, if you travel through Brooklyn, NY you will see some of the artwork of Harrisburg native Ian Potter, it is hard to miss them.

Although his name suggests a different kind of art, Potter is a painter. Much of his time is spent on ladders, elevators, and platforms against Brooklyn buildings. He works for Colossal Media, a mural company that hand-paints advertisements for brands like Nike, Spotify, Amazon, and Coca Cola.

Colossal is, as the name suggests, huge, and Potter is one of their best painters.

But before scaling walls in Brooklyn, helping with the hundreds of murals Colossal makes each year, Potter made his debut at the Gamut Theater in Harrisburg.

This summer, he made the trip to Harrisburg to give back to the community that gave him his debut. Potter, along with a team of local apprentices, painted Sprocket Mural Works’ largest mural to date, on the Mulberry Street Bridge in Harrisburg, as part of the 2021 Harrisburg Mural Festival.

While the mural itself is sprawling, the story of collaboration and education behind its creation can be even more inspiring.

Invest in the local

The Mulberry Street Bridge, which connects downtown Harrisburg to Allison Hill, once housed a 640-foot mural depicting scenes from life in the city.

However, in 2014, PennDOT removed the mural to rehabilitate the bridge. Since then, the bridge has remained like an empty canvas, until this summer, when Sprocket got its hands on it.

Sprocket hopes to have brought the bridge back to life with a newly completed new mural sponsored by M&T Bank and the Pennsylvania College of Art & Design, with a grant from the Foundation for the Betterment of Communities (TFEC).

The mural features larger-than-life portraits of true Harrisburg residents amid swirling colors. As the cars pass, they see an elderly woman, a mother and her child, a smiling man, a woman with flaming red hair, all members of the community, maybe even a familiar face.

“We really wanted to recreate the beauty of this project,” said Meg Caruso, co-founder of Sprocket, referring to the previous mural that was on the deck. “It’s really exciting because it’s our biggest project yet. “

But Caruso said his favorite part of creating the mural was using the talent of local artists who worked as apprentices under Potter’s direction.

While apprentices Sharnee Burnett, Kwatei Hector, Bryan Hickman and Jonathan Molina all have backgrounds in art, none have worked on large-scale murals, Caruso said.

“Having a mentor like Ian is really valuable for their growth and for Harrisburg, really,” said Caruso. “This means that for future projects we can bring in more local artists. “

Kwatei “Q” Hector, an artist from Allison Hill, has drawn since childhood and has organized a few exhibitions, but has never worked on a mural project.

This summer he participated in Sprocket’s Allison Hill Planter Painting Project. Recognizing his potential, Caruso offered him an apprenticeship with Potter.

Hector loved seeing how his painted planter was positively impacting his neighborhood and was eager to be part of another beautification project, he said.

“I am grateful that they beautify the city and allow me to be a part of it,” he said. “It’s a blessing to me.”

Hector said Potter taught him techniques including the use of an electroshock machine, a pen that burns tiny holes on a large sheet of paper to create a stencil to use when creating the mural. He then discovered “pouncing,” in which an artist taps a bag of charcoal powder over the holes in the stencil to transfer the outline of an image to a wall. This is the first time Sprocket has used these methods for a mural in Harrisburg, Caruso said.

Potter also trained Hector while he worked to paint the residents’ portraits.

“Ian has a great ability to teach,” said Caruso.

While Potter is now a mentor to artists, he remembers being an apprentice himself.

In the early 2000s, Gamut Theater hired him after graduating from university as an actor and scenographer. He is said to have, almost on his own, designed, built and painted sets for the theater which often features plays by William Shakespeare, among others.

“If I made a mistake he would say ‘don’t worry; no matter what anyone tells you, you can paint, ”Potter said. “It stuck with me and propelled me forward. It turns out that, years later, I would become the modern equivalent of a sign painter.

Judd taught Potter the methodology of painting, but most importantly, Potter told Gamut, he learned to have a strong work ethic.

It is this idea that he tried to pass on to his apprentices with Sprocket.

“It’s so cool to bring back some of that skill and knowledge,” Potter said. “This project aims to uplift our local artists in Harrisburg.”

While Caruso said Sprocket is always trying to find ways to use the talents of local artists for their projects, they have particularly focused their efforts this year, she said. This has manifested itself through projects such as the Planter Painting in Allison Hill, a mural painted by Harrisburg artist Sarah Fogg in Penbrook, and the Mulberry Street Bridge mural, among others.

“There is so much value in supporting the local,” said Caruso. “We want to support our local artists.

If you like what we do, please support our work. Become a friend of TheBurg!