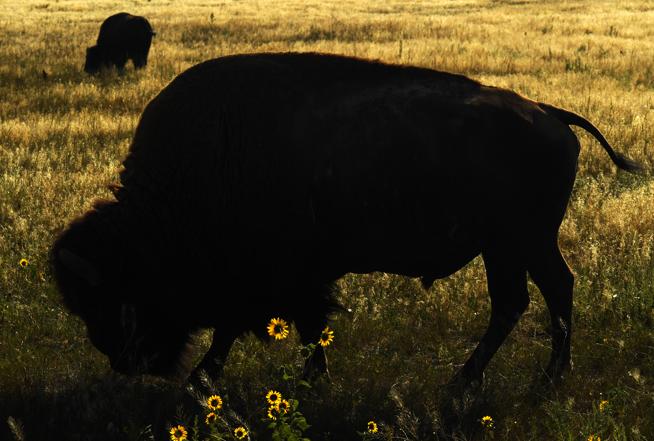 Editor’s Note: This was written as a personal column by me, the Opinion Editor, and not on behalf of the Daily Camera Editorial Board.

This fall football season started with all eyes on Ralphie – or more specifically Ralphie VI, our new Boulder buffalo mascot from the University of Colorado. It was exciting to see her gallop through Folsom Field on her debut in early September, the handlers dropping their hats while trying to keep hold of the 15-month-old baby weighing nearly 500 pounds. The crowd went wild, cheering for the animal that has been so iconic at Boulder University for decades.

The bison itself is a national treasure. Its distinctive image is the insignia of the Ministry of the Interior and the emblem on the uniforms of the rangers. The designer of the Buffalo Nickel said he couldn’t imagine a more iconic image of America.

This is why the disrespect and injustice towards the herd inside Grand Canyon National Park should put us off, as well as our new Home Secretary Deb Haaland, who reported on the networks. social that she relished the sight of migrating herds. Haaland has the power to reverse an unethical hunt that is overseen by his department; she should do it and soon.

On September 20 and for five weeks, the National Park Service began allowing 12 lottery hunters to each kill one bison from the 300 to 500 herd that grazes the north edge of the 1.2 million acre park. Hunting is normally strictly prohibited inside our national parks and for a good reason: it is to “conserve the landscape and the natural and historical objects and the fauna which are there”, according to the organic law of the National Park Service.

Federal law not only ensures the safety of wildlife within the park boundaries, it protects park visitors who wish to experience serene nature, not the sound of gunfire and the sight of bloody carcasses.

But the parks service, working with the Arizona Game and Fish Commission, has targeted the bison for a “lethal elimination pilot program” because they say we have too many bison that are damaging the park’s resources, including vegetation, water and sacred archaeological sites. There have been a lot of news stories lately reporting that we have, in fact, too many tourists ruining our national parks, but no one is talking about cutting them down.

Anyone who remembers the fate of another besieged species, the Grand Canyon burros, will experience a strong sense of déjà vu. Those exact same words were used by park biologists in 1979 to explain why they wanted to shoot hundreds of burros – to decimate waterholes, vegetation, and archaeological sites.

The park service believed that burros, originally introduced to the park as pack animals by gold miners, were a nuisance. But Cleveland Amory, a famous author who had started a new animal welfare group called The Fund For Animals, believed the park service was the nuisance, especially the rangers who were talking about a plan to use aerial gunfire to extermination. Eventually, the government chose to send a group of snipers to the park.

Thanks to Amory’s celebrity status drawing public pressure (he wore many hats, including the former curmudgeon and commentator of Today’s show), he convinced the park service to let him hire a professional rodeo cowboy and some Vietnam veteran helicopter pilots, and the end of this wonderful story makes for a great book (I wrote one) . The Grand Canyon burros were fought over, lifted by helicopter via a rope attached to a net sling and transported to the Black Beauty Ranch sanctuary in east Texas, where they lived their lives in peace. Even then-Gov. Bruce Babbitt, one of the early skeptics, hiked the canyon to show the state’s appreciation for what had been done.

It is not too late for public pressure and Haaland to help the Grand Canyon bison today find a better solution that is neither lethal nor contrary to our national values ​​for wildlife and wilderness.

It’s horrible to think of the bison in the park – inherently comfortable with humans trying to stand dangerously close to their smartphones – as sitting targets, which negates the idea of ​​a fair hunt. Or as former Montana Gov. Brian Sweitzer said in 2005 when he called off a buffalo hunt near Yellowstone National Park: “I don’t think we should have the equivalent of shooting refrigerators.

The history of the American bison became tragic long ago, when the United States military waged its vile campaign against Native Americans and the sacred animals that provided a wealth of spiritual life. The modern nightmare resumed in 1989, when hunters were allowed to slaughter wild herds leaving snow-capped Yellowstone National Park in search of food because authorities mistakenly feared the bison would widely transmit the disease to livestock. Since then, we’ve had to watch our state and federal governments sanction the massacres of wild herds, alongside an intensive management plan that included trapping, quarantining, shipping, and containment, as well as tagging animals with peroxide stripes and ear tags.

According to the parks service website, “more recently, park biologists have fitted bison with tracking collars to aid in annual population counts to determine whether or not reduction targets are being met.”

The State of Arizona and our Parks Department are working hard not only to remove nature from our parks, but also to turn our last herds of wild bison into domestic cattle. If only Amory was alive today.

Why nutricosmetics is the last frontier in skin care